What would you think, if you recently had chemotherapy as a breast cancer treatment and you woke up to these headlines?

Allow me to tell you what I thought.

Upon reading the many articles and trying to digest the evidence-based conclusions, I felt some unexpected reactions.

I encourage you to read them. The best, in my opinion, was in the New York Times, but allow me to give you a Cliff’s Notes about what they mostly say.

A very large study was published in the New England Journal of Medicine on June 3rd that showed empirical evidence that chemotherapy has been overused in some breast cancer patients. The study shows that there is no statistically significant benefit to using chemotherapy in the group of women that they studied. The bit in italics is wildly important because in none of the articles I have read have they said what the ages were of the women they canvassed.

Ok. Let’s unpack this a little. “Some women 50 and younger might benefit from chemo even if the gene-test results suggested otherwise. It is not clear why.” To me, this sentence is burying a pretty significant lede. It’s basically like saying, ‘If you are younger than 50 and you get breast cancer, this study basically doesn’t matter.’ It begs the question, who was a part of this study? Was it all women over 50? This detail is pretty crucial.

“Most cases of  breast cancer occur in older women: The median age at diagnosis in the United States is 62.” As a woman who had breast cancer at 35, this is just reaffirmation that media outlets are using flashy headlines to lure in readers. If the median age at diagnosis is 62, a solid number of women will fall under 50 and, again, this study doesn’t seem to speak to them/us.

The study is based on the information gleaned from the Oncotype test, which is a blood test that analyzes 21 of your genes for known breast cancer mutations and, in the end, assigns you a number between 1-100. The evidence is showing that women with scores under 10 do not benefit from chemo. Women with scores above 25 do. Its the 11-24s that lie in the grey area and, as luck would have it, the majority of women with breast cancer diagnoses fall into the 11-24s.

I am assuming there are a lot of women in the 11-24 range who are wondering if they indeed did have chemo in vain. I know I am. My Oncotype was 17.

I pulled this quote from the New York Times. The ‘recurrence score’ that they speak of is the same as ones Oncotype score.

So this is telling me that in my particular case, because I had a 17 and was under 50 at diagnosis, there was ‘some benefit’ to my chemotherapy. Phew, cause I mean if I found out a measly two years later that my chemo was a waste of gorgeous long hair, I would be P-I-S-S-E-D.

There are a whole bunch of other caveats that they discuss as being outside of the group that no longer benefits from chemo.

I also fall into one of these caveat categories. I had a metastasis to one of my lymph nodes:

You know what else isn’t discussed? All the many, many sub-diagnoses that you see on your pathology report, that each play a role in determining chemo’s effectiveness.

This is a lot of medical jargon that even I don’t understand, but I know that it was of value to my medical team when making the decision to do chemo.

I show this to you because I want to drive home that whereas this article seems to lump together 70% of us who didn’t need or won’t need chemo, there are tons of small details that can shift you into the ‘need chemo’ category. The information I have read doesn’t account for all the variance you see on my pathology reports above. I have no idea if this information was even considered in their results.

I am ALL IN on science, but the way the media has portrayed this finding is frustrating to me. It misrepresents all of us who fall into the grey area who DID have chemo. I for one would feel pretty shitty if I found out on my BuzzFeed app that I didn’t need the months of poison I had injected into my body.

I am also bothered by the fact that there isn’t enough mention of the details that make us all individuals requiring individual treatment plans. Treating a person’s cancer isn’t as easy as 1+2=3. It is more like, 1^5-673-4118/2= whatthefuckwhoknows.

This post may have been wildly boring and science-y and for that, I apologize, but I felt a strong need to address both the study itself and the media’s portrayal of the findings. As an official cancery person, it felt like my duty to start the conversation on these topics amongst my cancery peers. I know y’all saw this news coverage today and had some feels.

I would like to give honorable mention to the New York Times for this amazing headline:

I would also like to give Daily Mail dirty looks and major shade for this sidebar within the article about the study. Is this really what we needed to read about AT THIS MOMENT GUYS? 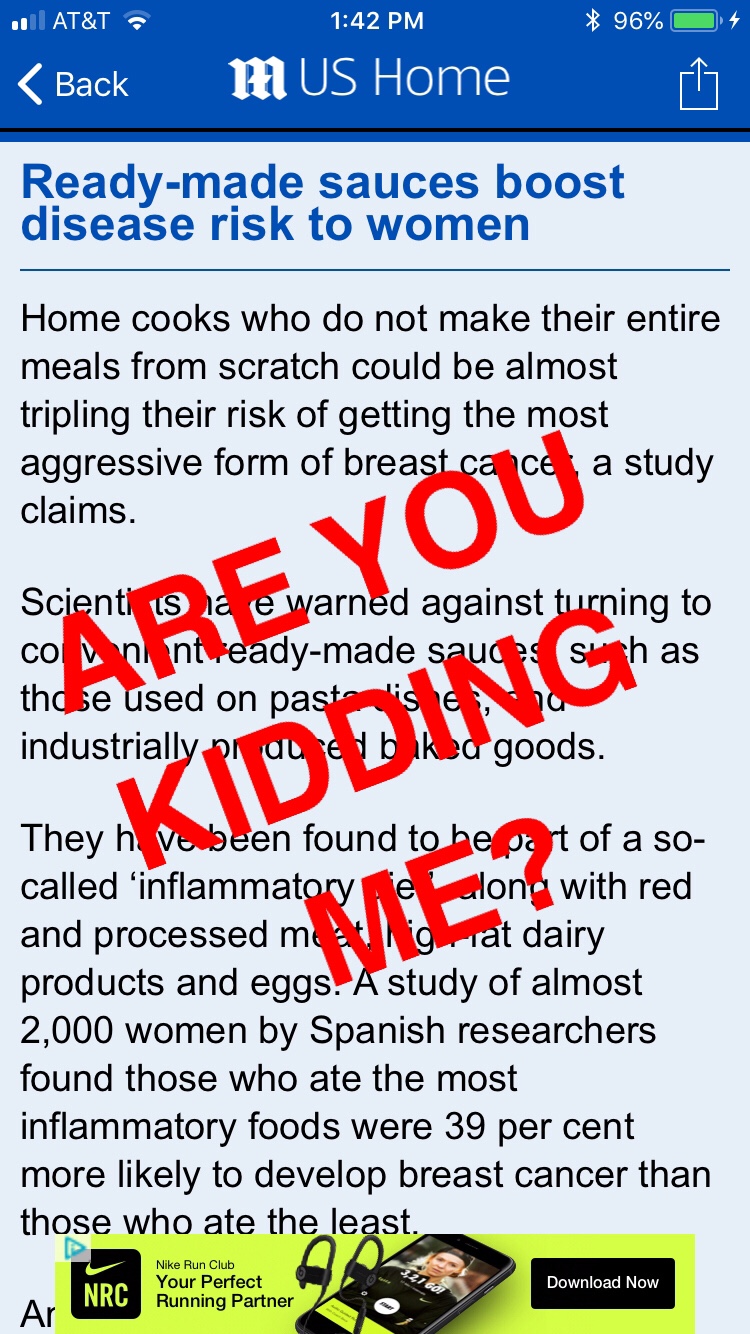