When I was a little girl I was obsessed with My Little Ponies. These were not the MLPs of today, who are slender, beautiful and sassy. My ponies were chubby, cute and lovable. I am sort of embarrassed to admit this, but at the height of my ponydom, I had 73 of these little plastic, equine toys. I remember the exact number of ponies because they were extremely important to me.

My mom knew the power of the ponies and she was careful to keep a whole bunch of my original toys. When my daughter was of appropriate pony age, my mom pulled my stash of MLPs from their sarcophagus and carefully hand washed them individually and even shampooed their manes so my daughter could enjoy them.

Eventually my daughter caught on that today’s MLPs are not the same as their paunchy 1980s counterparts. She preferred the slick new ponies and slowly, over time, my big-boned ponies were replaced by Rainbow Dash and her band of sleek pals who are now a giant cash cow (horse) for Hasbro with not only the pony toys themselves, but tv shows, movies, and pretty much any marketing opportunity you can imagine.

Don’t get me started on Equestria Girls.

This morning I spent a lot of time scouring the interwebs for ‘when will my hair fall out on TC chemo treatment?’  There is a shocking amount of congruent responses indicating that on day 13 after your first chemo treatment, your hair will be firmly affixed to your head. On day 14, however, the jig is up.

This seems improbable in so many ways, but I have to go with the pack and assume that next Tuesday is D-Day. That being said, I made an emergency call to my Hair High Priestess, Tharie, saying we needed to change it up one last time, while we still can.

I pretty much gave her carte blanche to do whatever she wanted, color wise. My only requirements were shaving the sides down to a 1 blade, thus removing any last traces of blonde, and adding full color to the ‘hawk.’

In what I consider divine intervention, I ended up looking pretty much identical to my daughter’s favorite My Little Pony, Princess Twilight Sparkle. I find this serendipitous for 2 reasons. 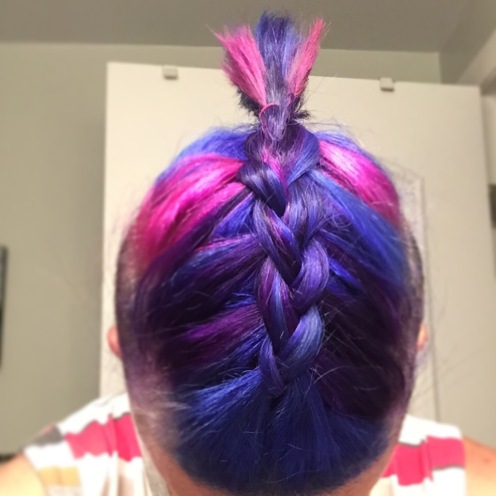 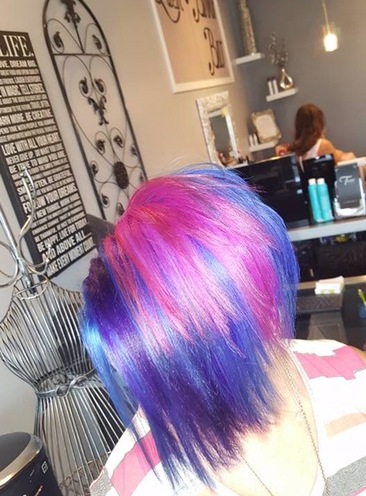