The arms race has begun. My arms are in an extremely close race as to who is the sadder appendage. Right arm definitely has seniority. She has been used and abused for over a month now. The surgeries, the cording, the multiple drains.

Lefty has been my trusty confidant this whole time, practically full range of motion, picking up a ton of slack from rightie. But then I had to go ahead and sacrifice lefty to the breast cancer gods too.

And I did have a choice, mind you. I could have had the port placed in my chest. I chose not to, as my chest has already been through enough and where they place chest ports is pretty high up near the collarbone so it would be very visible in almost any neckline, save a turtleneck– and turtlenecks in July don’t make a heck of a lot of sense.

Now some of you may have seen some interesting videos of me yesterday after the surgery. To say I enjoy me some heavy sedatives would be a giant understatement. I am so glad my sister took those videos, as I have zero recollection of them. Note to the general public: always take video of a loved one immediately post-surgery. It’s never a bad choice. It either turns out hilarious or it becomes solid blackmail.

Back to my arms. Lefty is very sore, as is to be expected. Nothing I can’t handle, in fact I haven’t had a Tylenol since breakfast and it’s now in the evening hours. I can see under the bandage it is bruised and a bit swollen. 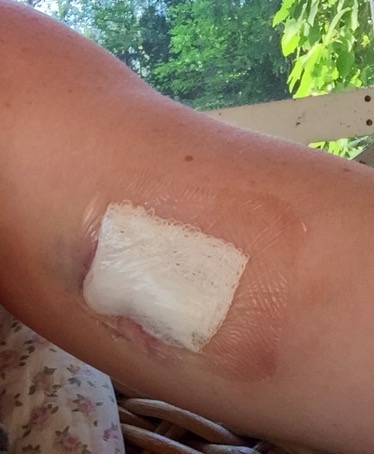 What is under there is the PowerPort™. I am disappointed that it doesn’t have a name like PowerPort 3000 ’cause that sounds so much cooler. This port just under the skin will allow me to essentially be plugged in to any medical intravenous line. They can draw blood, give me meds, etc. As skeevy as it seems, it beats a bunch of needle sticks every time I see a doc (which is a lot). 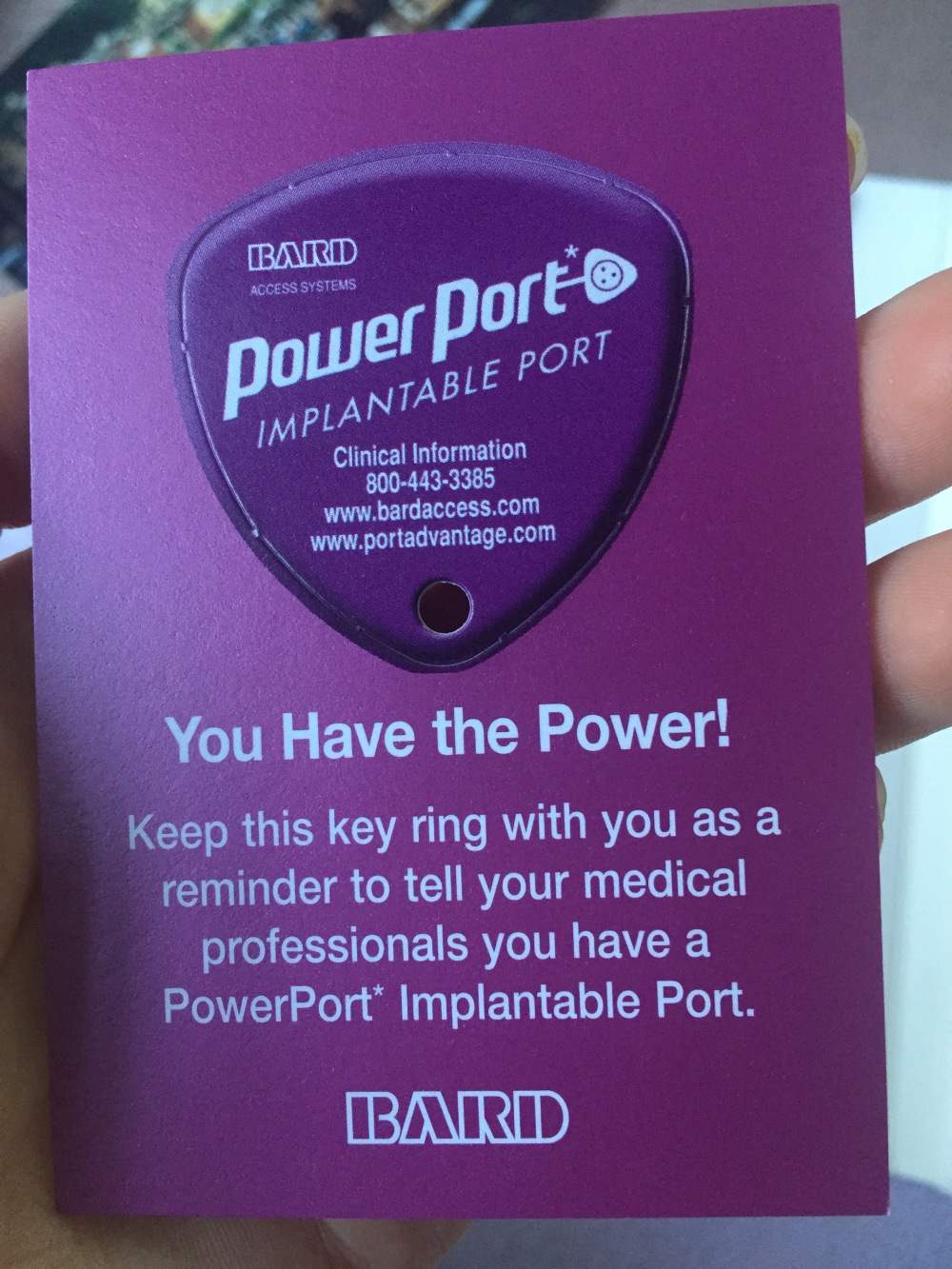 The good news is that, barring the unforeseen, surgery is over until all treatment is over and I can have my clunky breast expanders swapped out for gooey, yummy, bouncy silicone implants. Everyone says that surgery is no big whoop (compared to what we’ve already been through) and you end up with a fresh pair of perky tots so…

Now my only function is to heal and enjoy my life before chemo starts in 10 days. I began today by taking a walk with my sister. We walked the same route I ran the day before my mastectomy. Since my lower half remains unscathed I decided to squat down memory lane and do my fave squat steps on my fave bench. 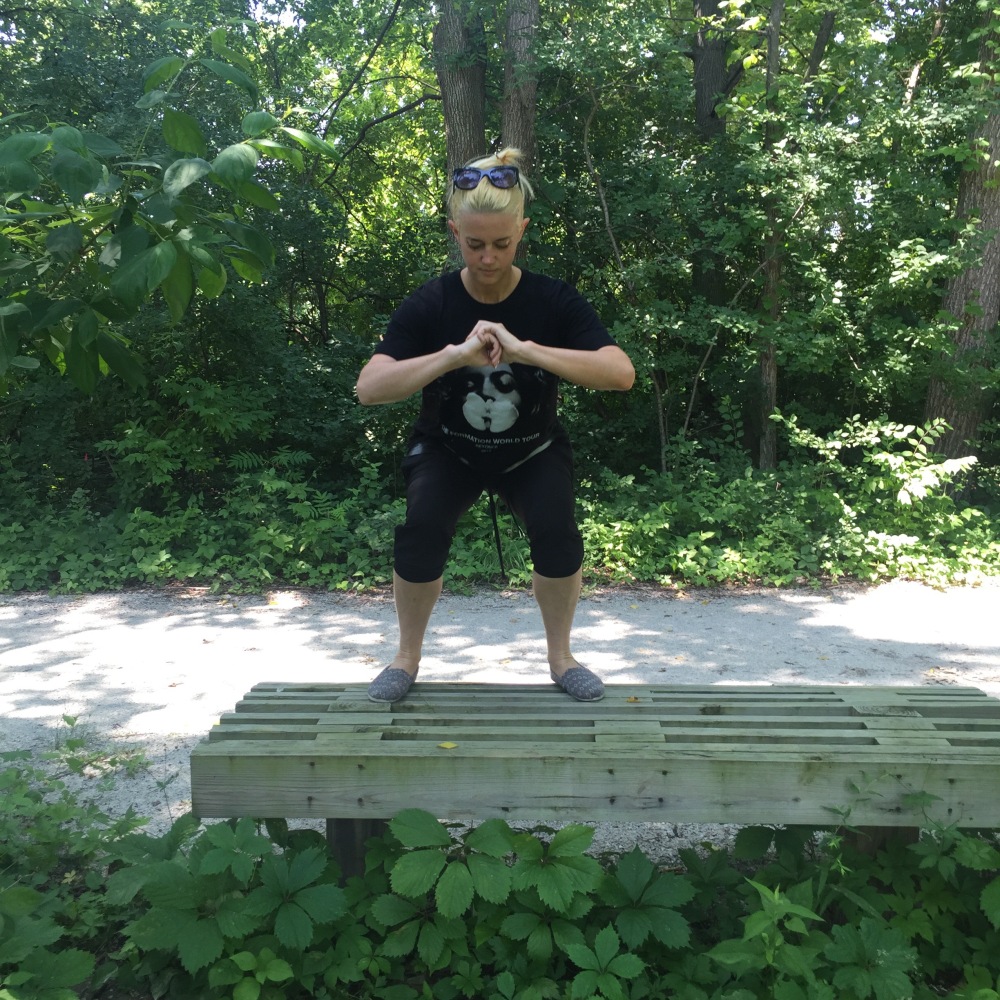 I was winded sooner than usual, but boy did it feel great to be drainless and working on my fitness. The bar is set pretty low folks, but I’ll get there. You just wait and see.

~Total side note: I’ve been having a minor Tourette’s episode about the word ‘port’ since yesterday and the one thing that keeps firing back into my mind is Portofino which translated means, the final port. I’d like to think this is my Portofino. To honor this moment of minor mental illness I found a picture of my sister and I walking in Portofino in 1994.~