Long time, no blog. I have missed writing Grancer so much, but the great news is that I haven’t had much cancery stuff to say.

Recently a cancery pal of mine sent me a DM asking if I ever thought about writing about my kids and how I handled cancer as a parent. I think about this topic all the time, but I haven’t taken the time to write it out, until now.

At the time of diagnosis I had three kids: a boy who was 7, a daughter who was 5, and a baby boy who was 2. These small people had already had their fair share of tragedy, even at such young ages. My father died of esophageal cancer when the older two were little and my mother in law died of ovarian cancer 3 months before I was diagnosed.

All they knew about cancer was that you died from it.

I got the call that I had invasive ductal carcinoma when I was home alone with the kids. It was dinnertime and I had to take in the info that I had cancer and somehow continue slinging nuggets without falling apart.

Luckily my mom lives nearby and was in the house within 15 minutes. My husband got home shortly thereafter. I don’t remember much about that night, but I know that the oldest probably knew shit was going down.

Let me stop and tell you a bit about my children. My oldest is named Luca and he is probably the most consequential to the story. Not only is he the oldest, he is a very mature thinker. So much so that he has worried about adult problems for as long as he has had rational thought. He is always listening to adult conversation and wanting to understand. He is an anxious boy. I sometimes wonder about ‘chicken or the egg’ syndrome with him. Was he as intense of a worrier before I had cancer, or did my disease do this to him?

My middle child is Cecilia. True to female fashion, she was a master manipulator by the time she was 2. She also seemed to be an advanced thinker, but was less concerned about what grown-ups were doing. She was more concerned about herself, for which I am grateful.

The baby is named Enzo and he doesn’t factor much into the equation because he was an actual baby. He doesn’t remember anything about my cancer treatment, though it is certainly a part of the fabric of his life now. The most important thing to know about Enzo is that he was born a frat boy and I am positive he could do a kiddie keg-stand of chocolate milk if given the chance.

Keeping my disease from the kiddos was not an option. As you probably know already, I am not good at hiding how I am feeling. I was not going to keep my disease a secret from anyone and I was prepared to wear my cancer on the outside. It came down to how we were going to tell them, not if.

Due to their young ages, we had some time to think about what and how to tell the kids about my disease. I got a bunch of library books, but the most helpful was called, The Silver Lining. I remember one page was all we needed, in terms of guidance for telling the kids. The gist was that you were to be straightforward and keep things in terms they could understand. Also allow them to ask questions.

My husband and I brought the kids into the backyard on a sunny spring day. I had the above mentioned book and a crib sheet of notes. I remember feeling so nervous. I was about to tell my tiny bosses that I was taking an unwanted leave of absence from active parenting.

So I told them. I said, ‘I have breast cancer. I will have a surgery in a few weeks which will take a while to get better from. I might also need more medicine that will make me seem sicker before I seem better.’ I asked if they had any questions. I got one from each older child. My 5 year old daughter asked ‘are you going to turn green?’ And my 7 year old son Luca asked ‘mom, are you going to die?’

I answered the first question with a solid maybe and the second with a solid no. This was imperative, as all they knew was that cancer killed people. And that was pretty much the end of that conversation. They went back to just being regular kids. That day. As the weeks and months went on, they morphed into superheroes.

I was lucky enough to have my mom live nearby and I moved in with her for the weeks post-mastectomy and for a few days after each chemo. I wanted to save them from the acute nastiness of those periods of time. My husband did double duty as mom and dad and we had a neighborhood girl nannying for the summer, who I will forever be indebted to, as she kept the whole crew afloat.

When I was with the kids I didn’t try and hide my misery. a) I am not a good enough actor and b) they may as well know that life isn’t always My Little Ponys and Happy Meals. They were encouraged to be a part of whatever I was going through. Did they want to see me clear a drain? Cool, let’s make it a science experiment. Did they want to help pull my hair out when it was time? That was a resounding HELL YES. 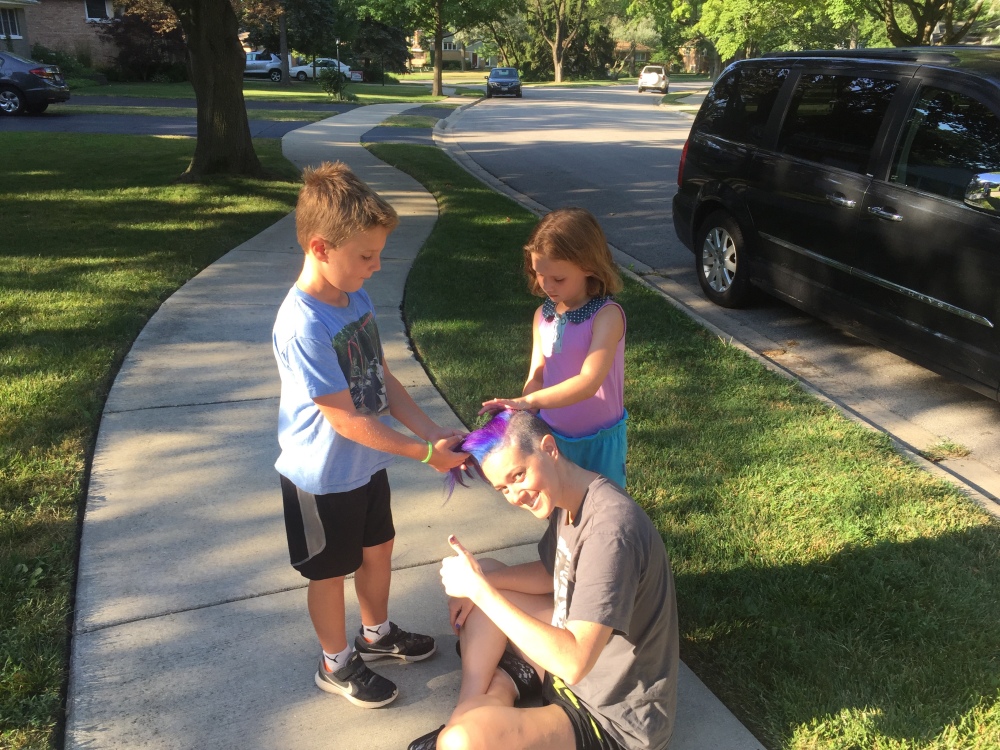 I tried to make cancer fun as much as I could. I brought them with me to pick out breast implants. I let them choose an insane hairstyle and colors before all my hair fell out. I brought my oldest to chemo and let him sit in the bed building Legos as he was showered with graham crackers and juice (he maintains this was one of the best days of his life. Oh the irony). We took a trip to Disney where, thanks to an unrelated stress fracture in my foot, we got on all the rides immediately. A bald woman in a wheelchair with a foot cast? That is a one way trip to sympathy town and the kids rode that express train to exhaustion. 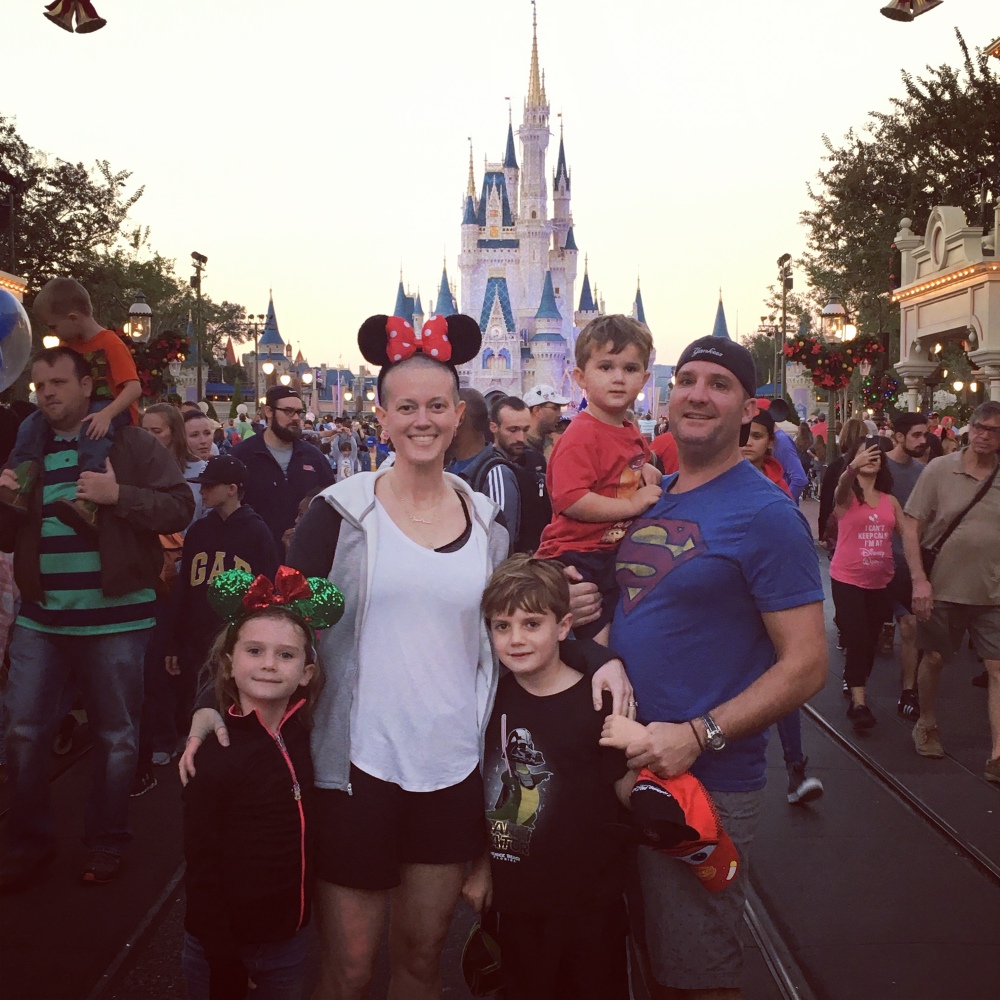 They saw a lot of real ugliness too. They knew there were times they couldn’t touch me because I was nauseous. They saw me cry tears of pain and frustration. They watched as the active mother they knew basically morphed into a pale bald recliner chair.

We became a bit of a local sideshow. It was summer and I was far too hot from chemo to wear a wig so I mostly went bald everywhere. I know that after I dropped the kids off at camp or a sport, they were left to explain why their mom had no hair. As innocuous as that could be, I am sure that it was far too big a job for a 7 & 5 year old. 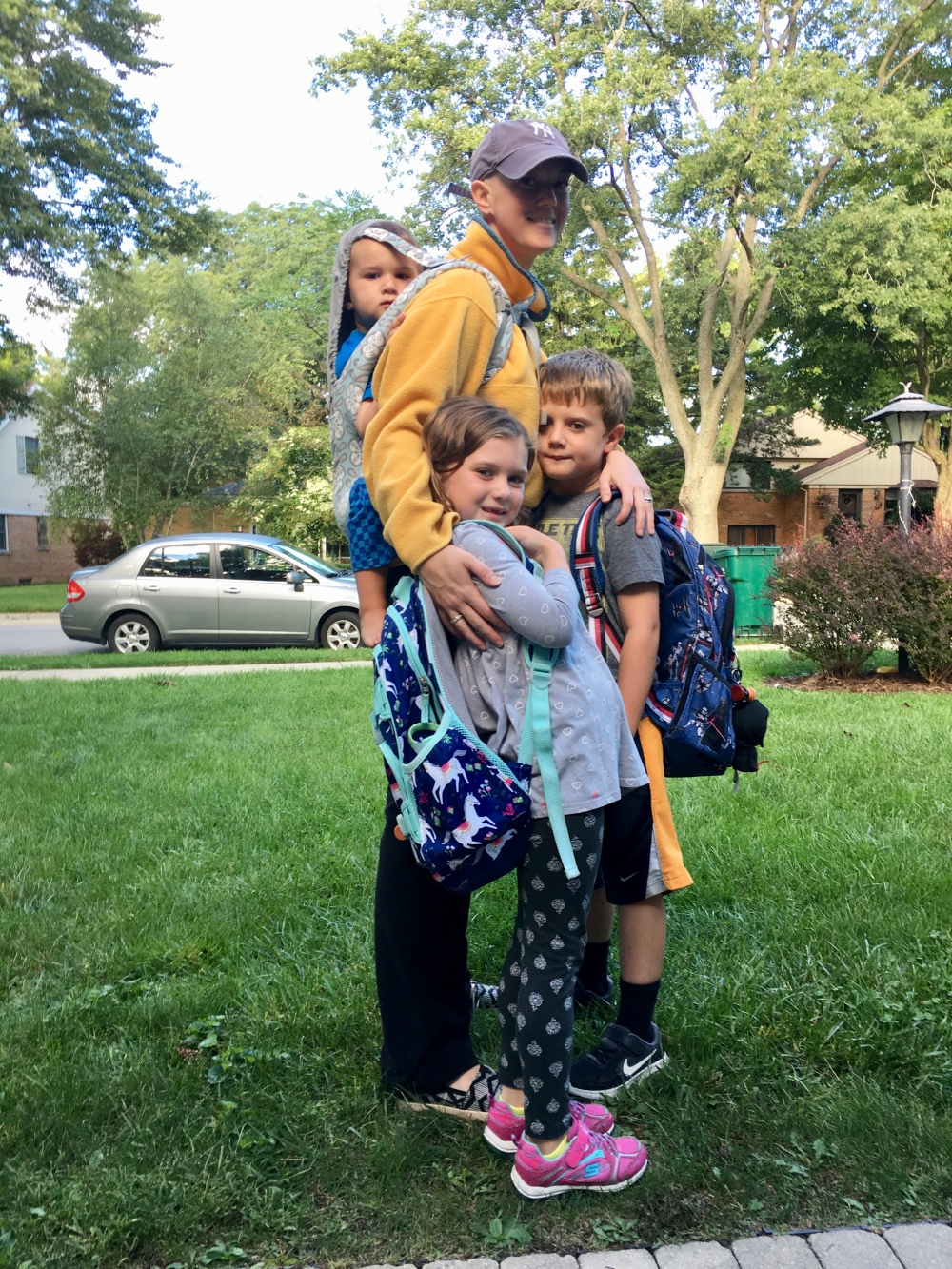 I am 3 years out now. The kids are 10, 9 & 5. Cancer is a part of their daily lives now. I am so active in the breast cancer community that there is always something cancery going on. We have a giant painting of me holding a bomb with my diagnosis on it in our dining room, so there is literally no escaping it. I am the local cancer lady and by proxy, they are the local cancer kids.

This year I became the spokesperson for an international beauty campaign (pause here for your inevitable chuckles) that benefits breast cancer research around the globe. Because of this, photos of me topless are basically everywhere you look. Not only did the poor kids have to weather cancer, they now have to have photos of their mom seemingly nude as the #1 Google search for my name, for life. That is rough. Sorry guys. 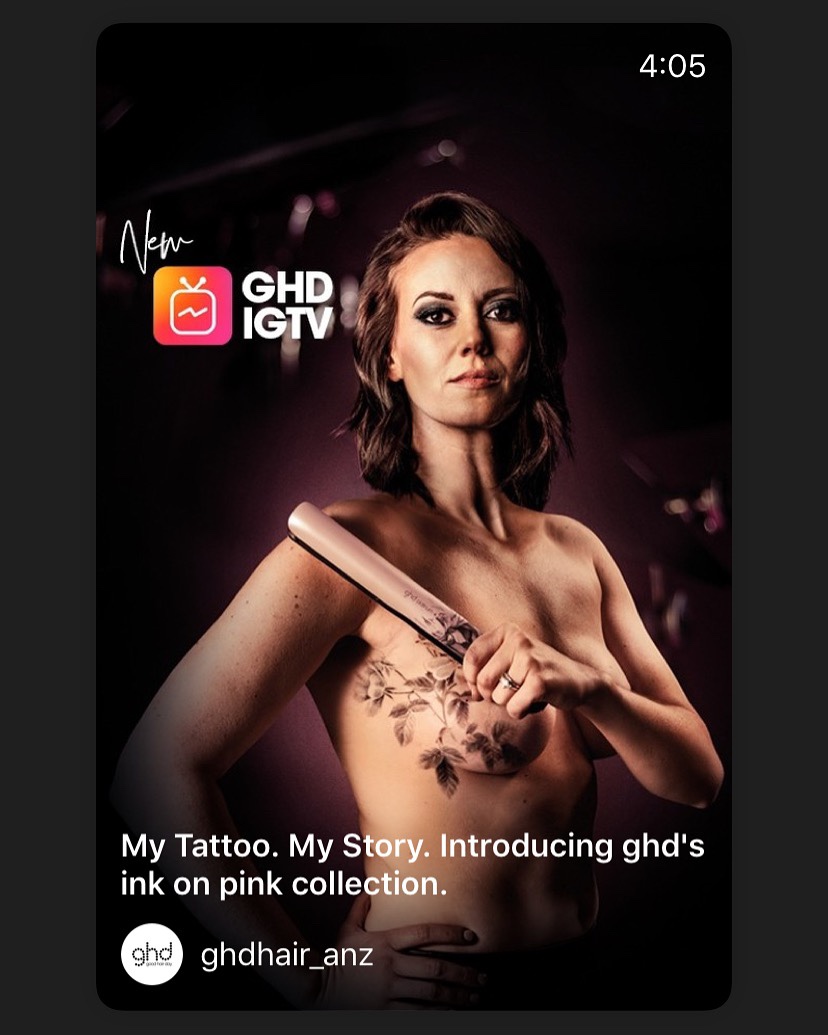 My oldest watches me closely to make sure I am making healthy choices; a burden I so wish he didn’t have to bear. My daughter claims she does not want to have biological children. I haven’t been able to draw a straight line on this one yet, but I fear it has something to do with her connection of breastfeeding and cancer (I found my disease through some fluke breastfeeding long after weaning). The little one just wants to show you his butt, which I am quite positive is not cancer related, but I’m going to go ahead and blame this on cancer, too.

They have seen things no little one should have to see. But you know what? I truly believe they are better for it. The older two are rather empathetic. They seem to know even before you do that you might need help. They have seen their mother weep, but they have also seen her rise.

Did they have to learn these skills way too young? Absolutely. But will they benefit from these early life lessons in exponential ways that won’t even be realized for years? Yes ma’am.

I can’t say that our level of transparency is for everyone. It was the only way I knew how to do it. I’ll never know what my kids would have been like had they not had to watch their mom go through cancer. And I’ll never know how much living alongside the disease intrinsically changed them.

But I do know this; they survived it too. We think about co-survivors as partners, siblings, friends, but our children are worthy of this title as well. I am proud to be their mama.